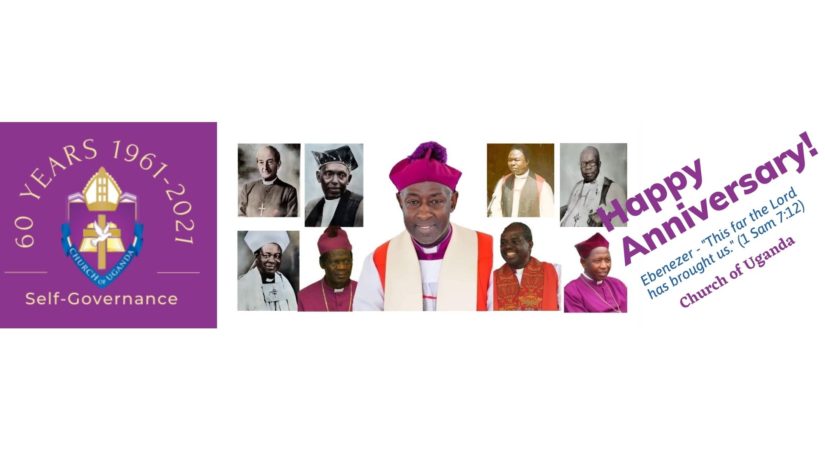 At the invitation of Kabaka Mutesa I of the Buganda Kingdom, the first missionaries from the British Church Missionary Society (CMS) arrived in Uganda in 1877 and set up a base of ministry on Namirembe Hill. Schools were started, medical outreaches conducted, and churches begun. Mengo Hospital was established in 1897 as the first centre of modern medicine (Mulago Hospital wasn’t founded until 1913), and Mengo Primary School was established in the same year. The proclamation of Jesus Christ as Saviour and Lord also ushered in modern medicine and education.

In 1885, Bishop James Hannington was martyred as he traveled to make his first pastoral visit to the missionaries and converts in the Kabaka’s palace. More Ugandan converts were martyred after that, culminating in 26 youth in the King’s court being martyred on 3rd June 1886.

An early African Christian teacher from the 2nd century AD called Tertullian said, “The blood of the martyrs is the seed of the church.” Mutesa’s successor, Kabaka Mwanga, thought he could stop the spread of Christianity by killing converts who refused to renounce their faith. The opposite, in fact, happened. Their willingness to die for their faith fueled the spread of the Gospel as others realized that it was actually a faith worth living for.

In 1899, Bishop Alfred Tucker became the 1st Bishop of Uganda (which included the regions now known as Rwanda and Burundi) and emphasized raising up and training Ugandan converts as evangelists, catechists, and clergy. Against the prevailing attitudes of his day, Bishop Tucker believed the church should have autonomy and develop its own governance structures. He proposed measures to the Church constitution that would grant considerable power to the indigenous Anglicans in what was known as the Native Anglican Church. These radical proposals, however, were opposed by the missionaries which resulted in a church hierarchy that was primarily expatriate until the independence of Uganda decades later.

It took 62 years after Bishop Tucker was named Bishop of Uganda for his vision of an autonomous, locally governed church in Uganda to be realized. Nevertheless, those years were still very fruitful for the propagation of the Gospel, the establishment of schools, and the spread of modern medicine throughout the country. In 1896, Apolo Kivebulaya left Uganda with a Bible and a hoe to preach the Gospel in Boga (Zaire). Like Kivebulaya, most of the evangelism in Uganda was done by Ugandan evangelists, which greatly increased after the East African Revival took root in the mid-1930’s.

The spiritual influence of the East African Revival cannot be underestimated, and it had a profound impact in most communities and families in Uganda, especially the communities in western Uganda. It also has had a great influence on the spirituality of most evangelical churches in Uganda up to today. The cultures of western Uganda completely changed their traditional way of naming children to reflect their Christian identity. The practice of giving testimonies to the power of God at work in daily life and the singing of Tukutendereza Yesu became normative. Born Again Revival families embraced girl-child education, respect for women, monogamy, and household hygiene, all of which resulted in deep transformation of families and entire communities.

By the 1950s Ugandans began to be consecrated as Bishops and served as Assistant Bishops over regions in the two dioceses. Among those pioneering bishops were Bishops Aberi Balya, Festo Lutaya, Kosiya Shalita, Stephen Tomusange, Erica Sabiti, and Silvanus Wani.

On 16th April 1961, Bishop Leslie Brown, then Bishop of the Diocese of Uganda, was enthroned at St. Paul’s Cathedral, Namirembe, as the first Archbishop of Uganda, Rwanda, Burundi, and Boga-Zaire.

During the past 60 years of self-governance, the Church of Uganda has continued its mission of preaching the Gospel and growing the church. In 1980, the Anglican Churches in Rwanda, Burundi, and Zaire formed their own Francophone Province, and Uganda remained as the Church of Uganda. (To watch a video of greetings to the Church of Uganda on the 60th anniversary from the Bishop of Boga and the Archbishops of Rwanda and Burundi.

One of the first tests of the Church of Uganda’s self-governance came when Bishop Erica Sabiti was elected the first Ugandan Archbishop in 1965, but was not allowed to be seated in Namirembe Cathedral. He remained the Bishop of Ruwenzori, while also serving as the Archbishop. It wasn’t until 1972 that the impasse was overcome by the creation of the purely urban Diocese of Kampala, which would automatically also serve as the Diocese for the Archbishop. Archbishop Sabiti then became the first Bishop of Kampala, where he served from 1972 until his retirement in 1974.

The Church of Uganda’s early self-governance was further tested in the 1970’s when Idi Amin’s Presidency turned corrupt and brutal, resulting in the disappearance and deaths of many Ugandans. The House of Bishops became more outspoken against these atrocities, ultimately provoking Idi Amin to assassinate Archbishop Janani Luwum on 16th February 1977.

Sharing of Ministries Abroad (SOMA), a global Anglican Charismatic Renewal Ministry, began serving dioceses in the 1980’s and teaching the Biblical foundation to the Charismatic Movement, which emphasized ministry in the power of the Holy Spirit. This gave birth to the Anglican Renewal Movement in Uganda that empowered many emerging leaders in the Church at that time.

The 1990’s were declared a Decade of Evangelism and the Church of Uganda took that ministry very seriously. Many people came to Christ during that Decade, which laid the foundation for the current emphasis on discipleship. The Provincial Strategic Discipleship Movement (PSDM) is focused on helping Church of Uganda believers be intentional, relational, transformational and missional. In other words, propagating the Gospel and growing the Church through discipleship.

At the same time as all this remarkable spiritual growth was taking place after the overthrow of Idi Amin, dark clouds were forming through the HIV/AIDS pandemic and the LRA insurgency in Northern Uganda. Both were robbing thousands of lives from families and significantly slowed the economic recovery after Idi Amin decimated the country’s economy. The Church joined forces with the government and NGO’s to adopt a home-grown strategy of HIV-prevention called ABC – Abstinence before marriage; Be faithful in marriage; Condoms, if necessary. This strategy significantly reduced the rate of infection and prevalence of HIV/AIDS in the country. The Church, likewise, played vital roles in bringing to an end the LRA insurgency. Families have been enabled to return home to their land and start rebuilding their families, homes, churches, schools, health centres, and businesses.

Further fruits that have come from this season of self-governance are the expansion of the Bishop Tucker Theological College into Uganda Christian University, the increase in the number of Church-founded hospitals, and the completion of the Janani Luwum Church House as a commercial office building for the purpose of generating income for the church’s ministry.

Rev. Henry Venn was the General Secretary of the Church Missionary Society in the mid-1800’s. He observed that healthy churches were self-propagating, self-governing, and self-supporting. The Church of Uganda’s first 60 years were clearly an era of self-propagation through the spread of the Gospel.

The 2nd 60 years have been a season of self-governance while not forgetting evangelism and the need to be self-propagating.

We now stand on the edge of the next era – the era of becoming fully Self-Supporting, which is why the Church of Uganda’s vision is “A faster-growing, sustainable, Christ-centred Church.”

The Church of Uganda’s Strategic Plan recognizes that a healthy church must do all three things at the same time – be self-propagating, self-governing, and self-supporting. It addresses all three areas through its four Strategic Objectives:

To continue our commitment to being self-propagating, the Strategic Plan includes three Strategic Objectives in the Mission Focus:

1. Increase Church membership by at least 25% over the period

3. Church leaders (Bishops, Clergy and Laity) identify and rely on spiritual gifts of members for ministry

To continue being self-governing, the Strategic Plan includes three Strategic Objectives in the Institutional Focus:

Finally, to seriously engage the new era of Self-Supporting, the Strategic Plan includes 4 Strategic Objectives in its Socio-Economic Focus:

1. Increase CoU infrastructure (spiritual, social and economic) by at least 25% over the period

2. Church of Uganda has legal ownership and full control over its Educational, Health and other facilities 3. Church generates funds locally

What role will YOU play in seeing the Church of Uganda become fully self-supporting in this third era?